As of December 9, natural gas had risen for the fourth straight week to the highest level in two years. Reports indicate the surge was due to colder than average temperatures in recent weeks. However, on December 12, January natural gas gapped down after the move up stalled at $3.777. The gap may be an early indication the move up is exhausted, though we doubt this is the case.

From a technical and fundamental standpoint, it is much too early to definitively state that the move up is over. Forecasts for persistent cold in coming weeks will most likely continue to support prices and the larger scale wave formations for January, February, and March all call for prices to ultimately rise to at least $3.90.

That said, this does not mean that corrections will not take place. Monday’s gap down was most likely the market coming back to reality a bit. The move up has been hard and fast, and if it is going to be sustained for the longer-term, corrections are necessary.

Since gapping down on Monday, prices have slowly inched lower, indicating the decline is most likely corrective. So far, support at $3.47 has held on a closing basis. However, near-term odds favor at least $3.41. This is the 0.618 projection of the primary wave down from $3.777. A close below $3.41 would open the way for confluent support at $3.36 and then $3.30. Unless there is a bearish shift in underlying factors, we expect $3.30 to hold. 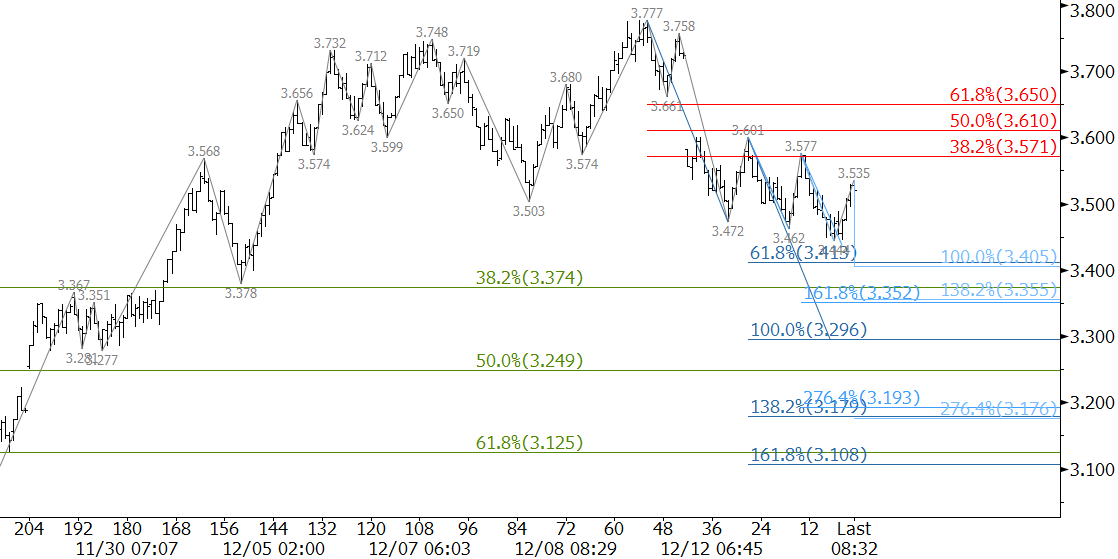 Initial resistance is $3.57. If prices are going to fall below $3.41, $3.57 will most likely hold. The most important resistance is $3.66. This is the top of Monday’s gap and near the 62 percent retracement of the decline from $3.777. A close over $3.66 would be a strong indication that the downward correction is complete and that the move up is going to continue its way toward $3.90.

This is a brief natural gas forecast for the next day or so (in this case, a bit longer). Our weekly Natural Gas Commentary and intra-week updates provide a much more detailed and thorough analysis. If you are interested in learning more, please sign up for a complimentary four-week trial.