Ask Kase: How To Trade The Shanghai Index 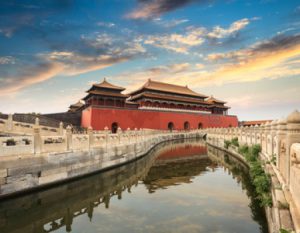 This week’s question for Kase: Is the Shanghai Composite Headed to Shangri-La?

“Shangri-La” usually brings to mind the Himalayan paradise featured in the 1937 film Lost Horizons. Even so, Asian-market traders may think of the recently concluded Shangri-La Dialogue. It’s reported that Secretary Ash Carter fumed about China’s causing tension by its island building. Japan and Vietnam are also upset. Meantime China is making efforts to form an Asian trade coalition hoping to eclipse US influence. Despite this, the US and China are on track for the Strategic and Economic Dialogue, in late June, and Xi Jinping is still scheduled to visit in September.

How’s the market responding? We can gain some clues by an analysis of the Shanghai Composite Index (SSE).

The Shanghai Index has been very strong. Back in 2013, after a post financial crisis rally, it had fallen to 1849.65. In the two years since, it’s almost trebled, closing over 5110. The rise has been particularly steep over the past four months.

Now, though, a correction is overdue. There are three major danger signs. First, the rise has become almost asymptotic. Markets correct as their trendlines become very steep. Secondly, as shown below, there’s an evening star setup on the weekly chart. This requires a close below last week’s open-close midpoint to complete. Thirdly, a lower high next week might complete bearish divergence signals on the MACD and Stochastic.

First support is a critical 4850. This is the completion point for the bearish weekly candlestick pattern, the weekly Kase DevStop warning line, daily DevStop1, the 38 percent retracement from the most recent 4431.56 swing low, and finally, this month’s open-close midpoint (so far). A sustained close below 4800 would call for 4700, the 62 percent retracement of the aforementioned wave, and the weekly DevStop1. Below 4550, a much more sustained decline would commence.

But for now, provided any excursions into the cold are modest, Shangri-La it is. 5200 and then 5600 are the numbers.

Remember to send your questions for next week to askkase@kaseco.com. For more information about Kase’s trading studies visit www.kasestatware.com.

2 thoughts on “Ask Kase: How To Trade The Shanghai Index”