5 Secrets to Staying Sharp as You Age 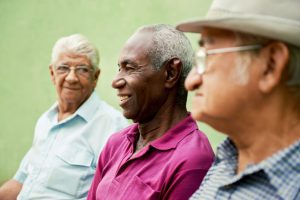 Worried about losing your edge during your senior years? Here’s how to stay on top of your game.

By Maryalene Laponsie with Cynthia Kase

Read on US News and World Report

Conventional wisdom may have us believe that life is all downhill after we hit retirement age. However, some seniors would beg to differ with that stereotype.

Estes is one of the older Americans who say fear of getting older and losing one’s edge is overblown. While Estes says she never gave much thought to her advancing age, a 2014 survey of over 2,000 adults by Pfizer found 87 percent fear some aspect of aging, with physical decline and memory loss being the most common concerns. Similarly, a 2009 Pew Research Center survey of nearly 3,000 adults found 57 percent of 18- to 64-year-olds expected to have memory loss after age 65.

Yet research from Cambridge University suggests one-third of global cases of Alzheimer’s disease may be attributable to preventable causes, a finding that could mean memory loss doesn’t have to be inevitable. The following are some of the ways science and seniors say people can stay sharp, even in their later years.

The Cambridge University study identified seven modifiable risk factors for Alzheimer’s disease, and physical inactivity was chief among them. The research, published in The Lancet Neurology in August 2014, estimated those who were inactive were 82 percent more likely to develop the disease than those who did 20 minutes of vigorous activity three times a week or 30 minutes of moderate activity five times a week. The findings echo a 2013 study published in the Annals of Internal Medicine which found those who are physically fit have a lower risk of dementia.

That’s good news for Cynthia Kase. She began bodybuilding in her early 30s and says her physical health is partly what keeps her at the top of her game. “I’ve always been very physically fit and very energetic,” says the 63-year-old president of consulting firm Kase and Company.

The Internet is rife with speculation that certain foods or supplements hold the key to the prevention or cure of dementia. Although research is ongoing, there are indications that what people eat affects their brain function.
A Mediterranean diet containing plenty of vegetables, legumes, fish and whole grains is associated with a reduced risk of cognitive decline, according to the National Institute on Aging. Those eating this type of diet have a 28 percent lower risk of developing mild cognitive impairment and a 48 percent lower risk of advancing from mild cognitive impairment to Alzheimer’s disease. Another study found rats fed a diet high in saturated fats and refined carbohydrates did significantly worse on memory tests than rats fed a diet with one-third the fat.

Although some studies suggest activities such as crossword puzzles and card games can stave off cognitive declines, the Journal of Psychosocial Nursing and Mental Health Services published a review of studies in 2010 and found that not all of them support the claim.

When it comes to staying sharp as a senior, the journal did report that having a mentally stimulating occupation – such as professors, pilots and doctors – was linked to maintaining higher brain function while aging. In addition, in 2013, Scientific American reported on European research linking higher levels of education with an increase in brain tissue and brain metabolism, both of which are thought to delay the onset of dementia.

Kase and Estes both subscribe to the theory that you’re never too old to tackle a new challenge. Kase recently published a video series, “Kase on Technical Analysis,” covering the complex topic of energy markets, while Estes has taught through a local lifelong learning institute.

“I have an open mind, and I try to learn something new every day,” Estes says.

“As we get older, we choose to abandon our imagination,” Baumberg says. “A lot of seniors have trouble with past memories, and they should focus on imagining [future events].” For example, Baumberg suggests seniors spend time imagining an outing, such as taking their grandchildren to the park, and visualize everything they see and hear, right down to the blades of grass.

A 2008 study published in Psychological Science by Harvard University researchers supports the idea that a lack of imagination can be linked to loss of memory. Baumberg suggests a couple minutes spent each day imagining a future event may be enough to help seniors stay sharp. For those who may be self-conscious about indulging in daydreams, Baumberg adds, “the best part is it can be done discretely.”

When asked what they would say to seniors who are worried about losing their edge as they age, both Estes and Kase are quick to say don’t worry.

“I don’t have the energy I had 30 years ago,” Kase says, “but I don’t like to think of that as a disadvantage. I like to embrace my life as a process.”

Estes echoes that ideal. “I believe in being focused on what I have instead of what I don’t have,” she says. “Live every day to the fullest.”

Researchers continue to study the causes of dementia and possible preventive measures. Although there is no guarantee of avoiding memory loss, these five strategies are simple ways to improve your chances of staying sharp for years to come.