S&P 500 Will Break Out Of Pennant, But Which Direction?

You can feel it in the air, the mounting anticipation of an interest rate hike is coming to a head as investors, traders, and even my own feisty grandmother are jockeying for position ahead of this week’s Fed meeting.

Some pundits believe a rate hike at this time would be disastrous and that Tuesday’s S&P 500 gain of 1.3 percent was a sign the markets are telling the Fed to wait. Others believe the rate hike is long overdue and that the sooner the Fed raises rates the better.

There is a lot of indecision about what the Fed will do this week. However, one thing is for certain, whether Feds hike rates or not, the market’s direction for at least the next few weeks, and possibly months, will be determined within the next 48 hours.

What Do The Technical Factors Say?

The formation of a pennant reflects the market’s indecision. The pattern is bearish because it formed after the decline to 1867.01 on August 24. That said, there are enough bullish factors to indicate this formation has a higher than normal probability to fail. 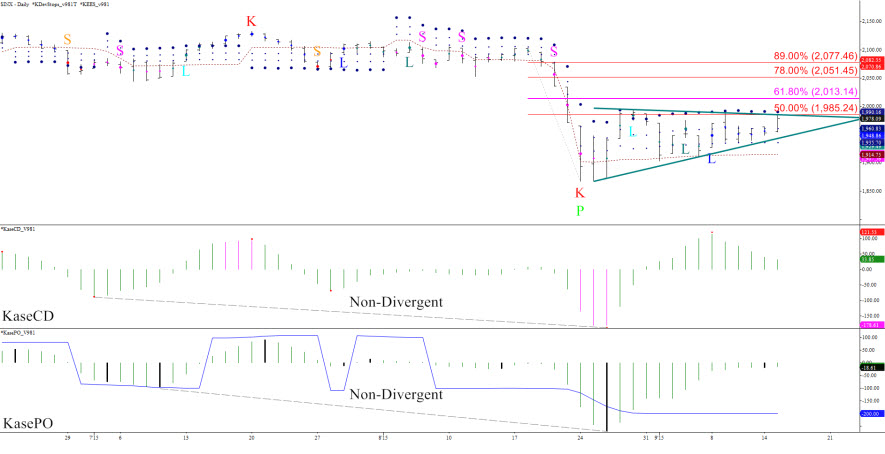 I am not calling for 1567 yet, but from a longer-term perspective, a decline to 1567 would be a normal technical correction (38 percent), and a 25 percent correction from high to low (less than half of the financial crisis’s decline).

It is a very tough call and the market could break either way. On balance though, I see enough bearish evidence to state that I think the Fed will hike rates and the markets will break lower.

Now if you’ll excuse me, I need to call to my grandmother and tell her not to bet the farm on the downside. Maybe some puts are in order.

Send questions for next week to askkase@kaseco.com, and click the link learn more about the KasePO, KaseCD, KEES, and the Kase DevStops.