Will the 10 Year US Treasury Note be Playing “Bass”?

As the 2H2015 commences, fundamental market analysts are lamenting the stock market’s prospects, pointing to low earnings and higher borrowing costs. US Treasury yield spreads are looking positive, which should be, in turn, negative for longer-dated fixed income instruments. So the key question is “will the 10-year note be playing ‘bass’ during the remainder of the year?” How low will the note go? 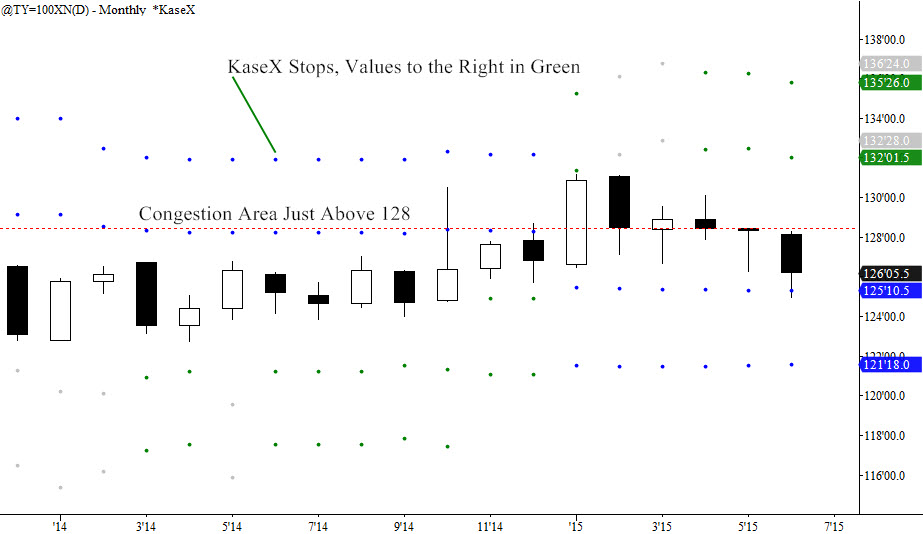 Charts created using TradeStation. ©TradeStation Technologies, Inc. 2001-2015. All rights reserved. No investment or trading advice, recommendation or opinions are being given or intended

Monday and Tuesday formed stars which are indicative of uncertainty given that the days’ opens and closes were close together. Also Tuesday’s closed only 1/32nd down from Monday. Monday’s high spiked over 127’0, filled the gap left on June 22’s open, but did not close within the gap, much less over. The two stars seem suspended above blank space.

Nevertheless the probability of a break down to 122’26.5 is high, with 65 percent odds thereafter for 120’28 to form temporary support, and then for 118’07, which might hold, at least for a while. These latter three targets are the 1.62 Fibonacci extension, Phi2 corrective projection, and trend terminus of the very same wave, respectively.

Remember to send your questions for next week to askkase@kaseco.com. For more information about Kase’s services please visit www.kaseco.com.